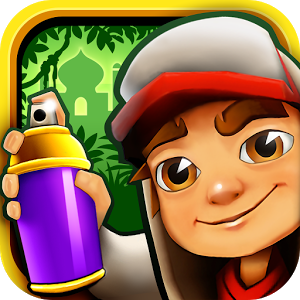 DASH as fast as you can!
DODGE the oncoming trains! Help Jake, Tricky & Fresh escape from the grumpy Inspector and his dog.★ Grind trains with your cool crew!
★ Colorful and vivid HD graphics!
★ Hoverboard Surfing!
★ Paint powered jetpack!
★ Lightning-fast swipe acrobatics!
★ Challenge and help your friends! Join the most daring chase! A Universal App with HD-optimized graphics.By Kiloo Games and Sybo Games

Subway Surfers is an endless runner video game. The game starts by tapping the touchscreen, while Jake (the game’s starter character) or any other character sprays graffiti on a subway and gets caught in the act by the inspector and his dog, who starts chasing the character. While running, the player can swipe up, down, left, or right to avoid crashing into oncoming obstacles especially moving subways, poles, tunnel walls, and barriers. By swiping rapidly as speed increases, more points can be acquired. A crash results in a game over, but the player can continue running by using keys. The player can collect various items such as coins, keys, score multipliers, super sneakers, jetpacks, magnets, mystery boxes, and power jumpers. A power jumper provides combustion by launching up the character, while a jetpack has an ability to fly, a coin magnet that attracts all coins on the track, super sneakers that give the ability to jump higher, and a score multiplier that multiplies the score. Items, such as a hoverboard, allows the character to avoid collisions lasting about 30 seconds. 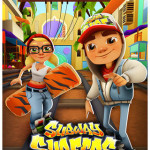 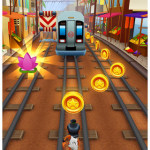 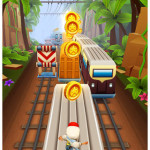 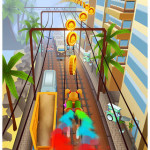 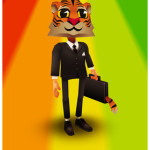 1.17.0
★ The Subway Surfers World Tour continues in India
★ Run through the colorful streets of Mumbai
★ Add the athletic champion, Jay, to your collection of limited characters
★ Check out the flashy new outfits for Tasha and Frank
★ Watch a Daily Video get 2 keys every day
1.16.1
★ Minor improvements