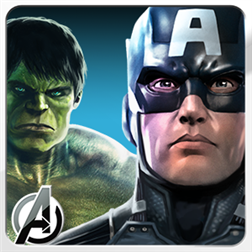 For the initial download, please note:
• A WiFi connection is highly recommended for faster download.
• Due to the size of the game, please ensure you have approximately 1.6GB of storage space (some devices might require more) and expect longer than usual downloading time.

Level up, gear up, and fight as HULK or CAPTAIN AMERICA in this epic adventure optimized for touch screen devices. Track down and defeat some of the world’s most notorious villains like Wendigo, Abomination, The Kronan, and The Skrulls, and help THE AVENGERS pull the world back from the brink of catastrophe!

In the wake of The Pulse, The Vault, a top-secret S.H.I.E.L.D. facility in the Rocky Mountains, has busted open, releasing all of the super-powered criminals and monsters imprisoned there. Aboard the S.H.I.E.L.D. Helicarrier, Nick Fury recruits a reluctant HULK to round up all the monsters he can while S.H.I.E.L.D. can assemble the rest of THE AVENGERS to figure out who opened the doors to The Vault — and why.

As HULK rounds up escapees from The Vault breakout, Nick Fury briefs CAPTAIN AMERICA on a top secret mission: S.H.I.E.L.D. security has been compromised by an unknown traitor and Cap must ferret out the mole to find out who or what is behind this dangerous new threat. Cap takes the fight to an ambushing HYDRA Helicarrier and faces a merciless rival.