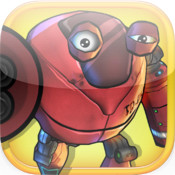 Circuit Chaser is a new take on classic scrolling shoot ‘em ups, which has been re-imagined in an exhilarating 3D perspective! Play as T0NY as you shoot, fly and destroy your way across a stunning 3D environment and collect precious circuits. Guide T0NY over and under challenging enemies and obstacles in this fast and fun-filled endless run & gun game.

T0NY
T0NY is one of many robots that are lined up for incineration after a failed experiment. Help T0NY escape in his first endless shoot’ em up game – how far can you take him?

STUNNING GRAPHICS
You’ll guide T0NY across an action-filled robot world as he tries to escape his creators who will be hot on his toes until the very end. The beautifully detailed world comes to life on mobile and tablet.

MULTIPLE SKINS
Select from a variety of skins to make T0NY look unique – such as the Tiger, Boot Camp and even Zombie!

SOCIALLY CONNECTED
Challenge your friends on the leaderboards to prove who is the best player.

Compatibility: Requires iOS 6.1 or later. Compatible with iPhone, iPad, and iPod touch. This app is optimized for iPhone 5.