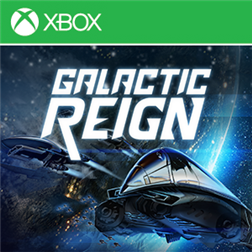 Galactic Reign is a head-to-head game of tactical expansion and conquest. You and your opponent colonize planets, design ships, and build fleets as you fight for domination of the galaxy. Ship design is crucial, as you must predict what their opponent is building and construct ships to counter it. When opposing fleets meet, the battle is rendered on the cloud, showing the result in a stunning cinematic movie.

Galactic Reign is turn based. You and your opponent take your turns whenever you like, and the game advances when you both have submitted your actions. In addition to player vs player strategy, Galactic Reign features an extensive collection of single player missions that challenge you to use clever ship design to defeat enemy fleets.

Buy once play anywhere. If you’ve already purchased Galactic Reign on Windows 8, there is no need to purchase it again! You can download the trial and still have access to the additional content. Purchasing on other platforms will only unlock the ability to gain achievements on that platform.