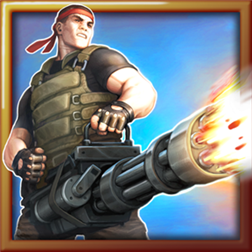 This city’s gone to hell, a war zone of burnt out cars, duststorms and the stench of death. The aftermath of a campaign of terror perpetrated by the most ruthless dictators and war lords the world has ever seen. Governments are helpless to stop the trail of destruction… it’s time to call in the big guns!

A band of the most ferocious, macho, gung ho mercs to walk the battlefield! There’s no job too small and if the cash is right, no job too dangerous.

When there’s no one who can help it’s time to call in… Guns 4 Hire!!
– Divide and conquer! Featuring squad based tactics and single character control, bring the pain to the insurgents!
– Killer Crew! Boomer, Faraday , Burns and L.T. all with their own specialist skills, ranging from explosives expert to Heavy artillery.
– Call in the big guns! Grenades, mines, automated turrets and when the action gets too hot… call in air strikes for total devastation!
– Juice up! Increase your squads resistance to damage and health regeneration with the addition of apparel and head gear, kill in style!
– Lock and load! Enhance flame throwers, miniguns, rocket launchers and handguns with over 20 separate upgrades per weapon!
– Wild Warfare! Play through 18 missions of bullet riddled, bone shattering carnage as you bring order to the city ‘Guns 4 Hire’ style.