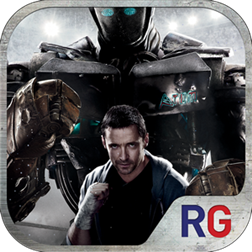 The ONLY official “Real Steel” game on App Store.

A Smash Hit with over 6 Million Downloads across all platforms.
Based on the Dreamworks movie, starring Hugh Jackman, Real Steel is an underworld fighting game set in the near-future, where 2,000 pound robots fight in a no-holds barred battles to the death.

===Get the latest update with awesome New Features & Robots!===

Hailing from Kyoto, Japan, at 8 feet tall and weighing in at 1425 lbs, the All-New Robot NITRO is here! Known as ‘The wheeler driller’, this monumental juggernaut is dreaded for his powperpack pistons, used only to shred opponents! Take your fights to the sea, Cruise ship the all new battle arena, available now in your favourite game!

Adding to this is the all new awesome TAG TEAM mode which lets you team up 2 of your favourite mean machines and take them to glory! Tag your partner in, knock the contenders out!
Test your skills in the real sport of steel! Get in the fight now!

You can also experience the fights with the other Robots in the movie such as – Atom ‘The People’s Champion’; Zeus ‘King of the Robots’; Twin Cities ‘Two Headed Tower of Power; Ambush ‘The Comic Book Crusher’, Noisy Boy ‘The Manga Mangler’; Midas ‘The Gold-Blooded Killer’; Metro ‘Frankenstein’s Monster of the Ring’; Gridlock ‘The Bronzed Body Builder Bot’; Axelrod ‘Wheel Spinning Fist Fighter’; Blacktop ‘The Bot Out of Hell’; Six Shooter ‘The Sheriff of RoboTown’; BlacJac ‘ The Casino Bot with an Amazing Hand’; Blue Bot ‘The Electric Blue Brawler’; Aqua Bot ‘The Diver Bot from the Deep’.

For optimal performance, we recommend closing other applications and re-booting your device after downloading and starting your first boxing bout.