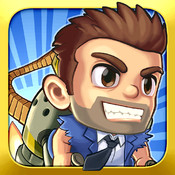 You’re going for a ride – from the creators of FRUIT NINJA! Now updated to support the beautiful Retina display for the new iPad!

Suit up with a selection of the coolest jetpacks ever made and take to the skies as Barry Steakfries, the lovable hero on a one-way trip to adventure! From the creators of the worldwide phenomenon Fruit Ninja comes the action-packed Jetpack Joyride, Halfbrick’s most anticipated iPhone game ever!

“This is seriously my favorite iPhone game right now. I don’t care if you have to go donate blood to afford it, do what you have to do.” — Touch Arcade

“Jetpack Joyride is, quite simply, an amazing game.” — IntoMobile

“Like all the best mobile games, Jetpack Joyride is criminally simple.” — Kotaku

“We are already blown away. Halfbrick looks like they have another hit on their hands.” — AppAdvice

“A miracle, by all accounts.” – PocketGamer

Join Barry as he breaks in to a secret laboratory to commandeer the experimental jetpacks from the clutches of science evildoers. After lift-off, simply touch the screen to ascend and release to descend, raining bullets, bubbles, rainbows and lasers downwards as you fly towards higher and higher scores!

You’ll start off with the legendary Machine Gun Jetpack to scatter the evil scientists, but throughout each game you’ll collect coins and complete missions to earn cash and buy new gear in The Stash! Pick your favorite jetpack, snazzy outfit and stock up on items then get back out there for more action!

Keen reflexes are your best weapon to avoid the obstacles in your path. These include lasers, electricity fields and even guided missiles, but thankfully this is a top secret lab – there will be even more goodies to pick up and help Barry along the way. Stay out of harm and you’ll reach massive scores, unlock Achievements and beat your friends on the online leaderboards!

Get a boost of speed and power using the Lil’ Stomper, Profit Bird and Crazy Freaking Teleporter, just a selection of the vehicles pickups available – all playable with one touch controls. You can even splash out and upgrade the vehicles with coin magnets or shiny gold plating for that bonus style factor!

Stay alive, get funky and lose yourself in Jetpack Joyride. There’s so much to see and do, all the time in the world and more than enough jetpacks! As always, Barry Steakfries will provide! 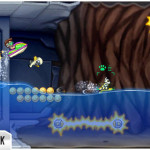 Barry’s back and ready to wreak havoc with new jetpacks, new outfits and a brand new vehicle! We’ve also added a rolling inventory system with weekly unlocks and content galore! Read on to find out what you can expect from the latest action-packed update to Jetpack Joyride!

NEW VEHICLE – THE WAVE RIDER
Flash floods are causing chaos at Legitimate Research! Luckily, Barry came prepared and has just the tool for the job. Get ready to speed across the water, dive for coins and land sweet jumps in your very own jet ski! Buy it now to gain early access or wait it out like a schmuck. The choice is yours!

NEW JETPACKS AND COSTUMES
Let the good times roll! Each week, a new jetpack or costume will be added to the game for a strictly limited time! New and existing items will also be switched on a weekly basis to keep things fresh and add to the excitement! Start saving those coins, prepare to go nuts and check back for more!

MRS DOUBTFRIES
New character? Alter ego? Arch-nemesis? Partner in crime? There’s only one way to find out! Stay tuned for the appearance of Mrs Doubtfries – a mysterious figure whose identity remains a secret!

Want to learn more about upcoming content? Join us online to receive special clues about each new item before it’s released! These are some of the most varied, unique and wacky creations yet!

Thanks again for your continued support and valuable feedback. We couldn’t do it without you!

Requirements: Compatible with iPhone, iPod touch and iPad. Requires iOS 4.3 or later. This app is optimized for iPhone 5.