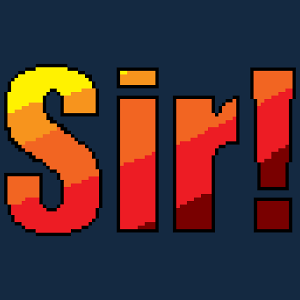 After some new prototype tech goes screwy and causes bugs to escape into the world only one man can save the day.
That man is a Reggie! An average, couch potato QA Tester with no talents what so ever!
Help our new saviour venture to and from work while the world around he slowly glitches out and breaks. Overcome obstacles such as killer cars, lava floors and men in bodysuits! Tackle the horrors of the daily commute but with more fire and serial killers.
Don’t think that this is a fun, cute adventure though, the world wants you dead! Dead! Dead! Dead!
Still think you’re up to the challenge and can help save the day?
Good!!!
Then grab Sir! I’d Like To Report a Bug! today for free and get to bustin’ those bugs!

WHAT THE PRESS ARE SAYING:
“The addictive gameplay, fantastic retro style, and crazy storyline make Sir! I’d Like To Report a Bug a must play game for all fans of challenging platformers.” – Super Game Droid
“This game isn’t meant to be casual, it’s a humorous experience for gamers nostalgic for the pain and punishment of yesteryear . . ” – Android Police
“You’ll find beautiful pixel art, chip tune soundtrack, and even in- game challenges that remind you of the pains of playing games back in the old days.” – Android Shock
“The game itself is quite remarkable. It has various forms of 2D art, a killer soundtrack, a very challenging difficulty level, and plenty more aspects that are sure to keep you glued to your device.” – Droid Life

FEATURES:
* Classic hard-as-nails 2D platformer gameplay for mobiles
* Very shiny pixel art, look at how beautiful it is!
* A raving, chiptune inspired soundtrack. Turn that volume up!
* Controls for mobile – on screen buttons or no buttons? We have both!
* Each level is unique thanks to the army of bugs blowing up the world!
* Jam packed with humour and references
* Challenge mode for those that fancy more fun for free
* The only game to ever feature flying old people, bouncing buildings and a level based on Eiffel 65’s “Blue (Da Ba Dee)”
* Like what you played? Donate to use and help us create more content for everyone to enjoy! 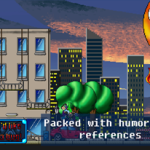 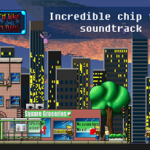 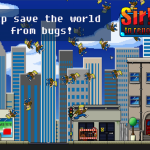 Version 1.0.2
Fixes:
* Fixed a problem with challenge levels loading instead of story levels
* Fixed a problem some users were having with object collisions
Version 1.0.1
Fixes:
* Better response for button control scheme
* Increased duration of story slides before the first level
* In game chat pop ups hang around for a bit longer
* Tiny bit of optimization
A big thank you to everyone who has downloaded, rated or supported us, it means a lot. Keep up the emails and reviews 😀