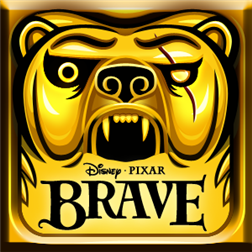 Temple Run: Brave is an official app from Imangi and Disney/Pixar with an all new look and new archery feature!

From Imangi, the makers of Temple Run, and Disney comes a new take on the most exhilarating app in the App Store. Join Merida from Disney/Pixar Brave as you run, slide, jump, turn and shoot your way across the wilds of Scotland on an endless running adventure!

Also includes all the great features from Temple Run:
• Simple swipe and tilt control that are easy to use and just feel right
• Level up your character and use crazy power-ups
• Endless play!