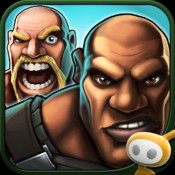 Optimized for the iPhone 5 and iPad 3rd Gen & 4th Gen.

Untold years after the first T.O.O.L. wars, the Tyrannical Oppressors Of Life have returned to finish the job. Only the Freakishly Rugged Advanced Genetics Galactic Enforcement Division (F.R.A.G.G.E.D) agents Percy and Francis Gun stand in their way. Armed with a new array of highly advanced and ridiculously destructive weapons, the Gun Bros are once again defending the galaxy from the T.O.O.L. insurgency. It is a time to innovate and eradicate. The last conflict has left both sides scrambling to rebuild their armories. Old Xplodium mines have been reopened and even decommissioned factories are once again roaring to life as the conflict escalates. It is up to Percy and Francis to stop this threat from reemerging with an even more devastating arsenal of killing machines. The Gun Bros are back and, once again, responsible for defending the galaxy. Luckily, they’ve got access to a host of new gear that will help them defeat T.O.O.L.

REAL-TIME MULTIPLAYER!
Battle the T.O.O.L hordes with your Gamecenter friends, head over to the all-new Endless Mode and check it out!

NEW GUNS & MODS!
Choose from a broad range of weapons; from pistols & rocket launchers to new and improved laser weapons & shotguns. Collect MODS and strap them on your weapon to gain secondary, tertiary and even quaternary fire modes! Players can even unleash multiple MODS at once!

MEGA BOSS BATTLES!
Battle against the Pus Titan, Maullusk and The Broliminator! These monstrous bosses are enough to get any Bro excited…

TANKS!
No tour of a hostile alien planet would be complete without a tank to mow down the locals. Hop into the Honey Badger tank and do some donuts on your enemy’s face. Comes standard with missile launchers and inertial accelerator. Safety belts not included…

MULTIPLE GAME MODES!
Advance through each mission, unlocking new environments and better loot in the Campaign mode or work your way to the top of the leaderboards in the Arcade mode!

FREE ARMOR!
Every mission contains armor, but it’s up to you to find it and grab it. Increase your HP and SPD with bold new styles conceived by the galaxy’s top fashion designers and military experts, many of whom are the same person.

Gun Bros 2 is free to play, but you can choose to pay real money for some extra items, which will charge your iTunes account. You can disable in-app purchasing by adjusting your device settings. 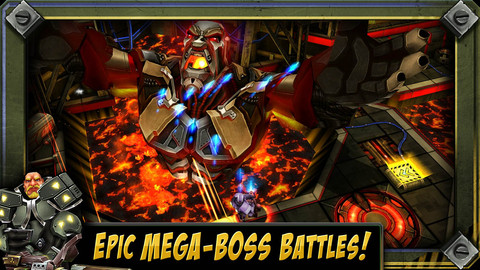 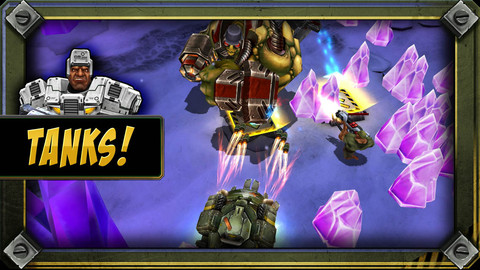 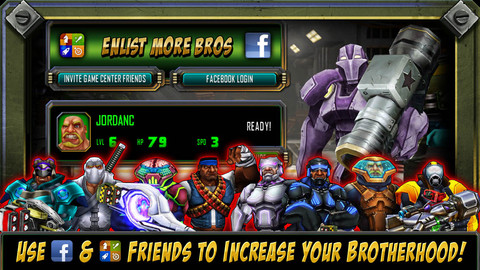 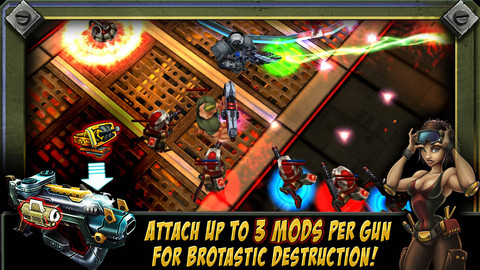 ►Armor Crates in the Black Market! Now it’s even easier to get the exact Armor you want through our Daily Armor Crates. Keep an eye out for these Special Promotions!
►Beginners Pack is an even better value now, it now includes a hard to find gun mod!
►No more Purple Barrier Enemies! – You asked, we listened, we’ve simplified the weapon barrier break system, now you only need to worry about red and blue barriers. Two guns, two barriers!
►We’ve re-designed the Puss Titan Boss Battle in Campaign 1 Mission 4!
►Bug fixes and other improvements to game performance