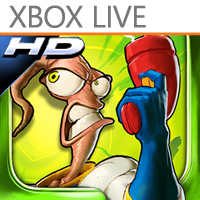 Grooooovy! One of the all-time most iconic video game characters is now coming to your smartphone!

Live or re-live the freaky adventures of Earthworm Jim in a refreshing remake of the classic action/platform game.

Jim was an ordinary earthworm who did very earthworm-like things. One day, during a battle in outer space, a suit dropped to Earth and landed on Jim, mutating him into a large and intelligent (at least by earthworm standards) superhero. When Jim learns of the evil plans of Psy-Crow and Queen Slug-for-a-Butt, he decides to rescue Princess What’s-Her-Name.

Play as the grooviest earthworm in the galaxy, and explore a crazy universe that offers huge gameplay possibilities: